Decisions, decisions! Alice and I were getting ready to head off to visit her parents in London. Should I take my 400mm lens, or take my 200mm lens and a 1.4x teleconverter as I did last year? Even on sunny days, the northern latitude sun in the autumn is just not that bright, and combined with taking photos in shaded areas, I found out last year that I really needed a monopod without going to higher ISO's. I finally decided to take the 400mm lens only if I could fit my collapsed monopod in my suitcase - it did not fit - drats! But that turned out to be a blessing in disguise, as we only had sunshine on the first full day and the last full day there. The rest of the days were cold, overcast, and rainy. Figures - it was beautiful in London the week before we arrived. So I ended up taking many of my photos looking through the glass windows of my in-law's house, or at ISO 400 to 1600 along dark foot paths in their north London suburb.

After two previous years of London wildlife photography and reading the English bird guide books, I was hoping to photograph three target birds, a fourth on the voyage home, and the fox that visited my in-law's garden (backyard) almost every night after dark, looking for scraps of food and the occasional avian delicacy. I saw 23 bird species in north London (14 in their small garden), including two of my three target birds: a Goldcrest and a Green Woodpecker. There are additional photos from this trip and from previous London trips on my web site (URL at bottom). New life birds for me are shown in bold. 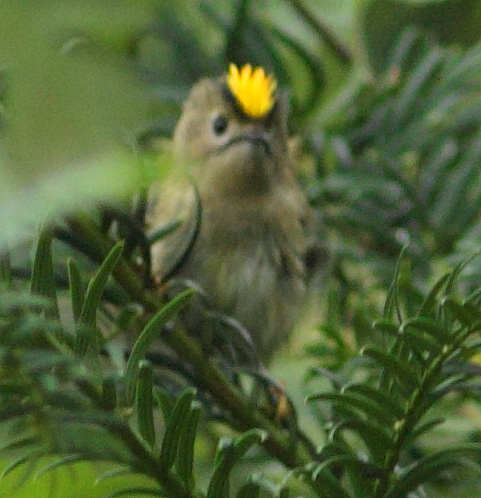 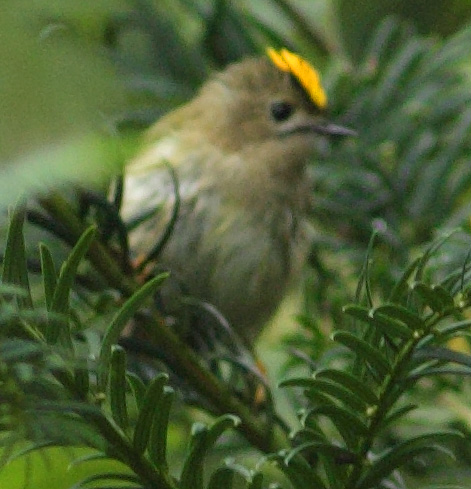 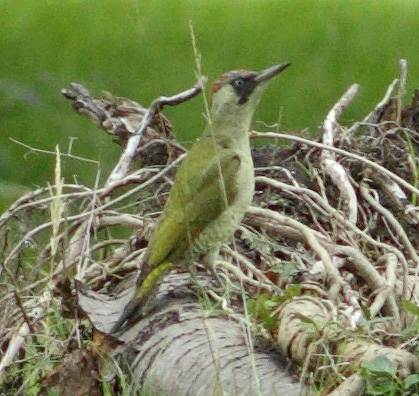 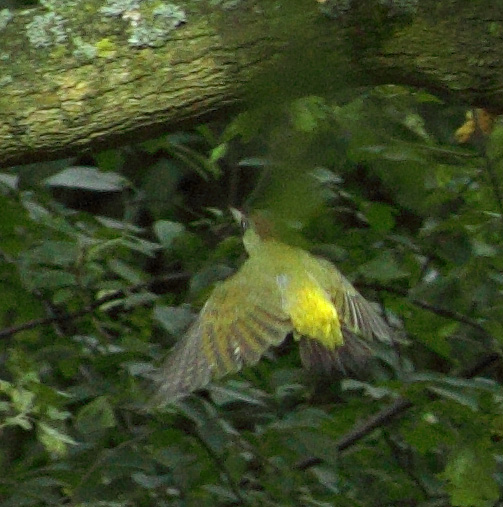 My in-laws had two bird seed/nut feeders, and we put up a suet feeder. They also put bread crumbs on their small patio to attract the birds. The most common visitors to their garden were Eurasian Robins, Blue Tits, Great Tits, and Coal Tits. I saw a few Long-tailed Tits, but none of this trip's photos of that species were keepers. 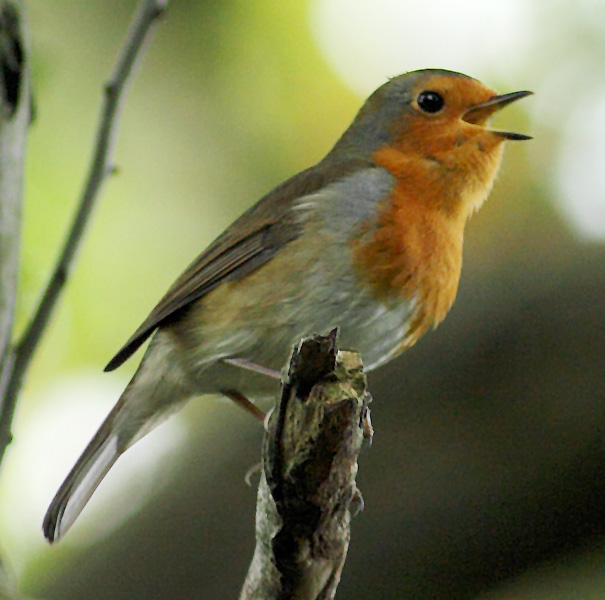 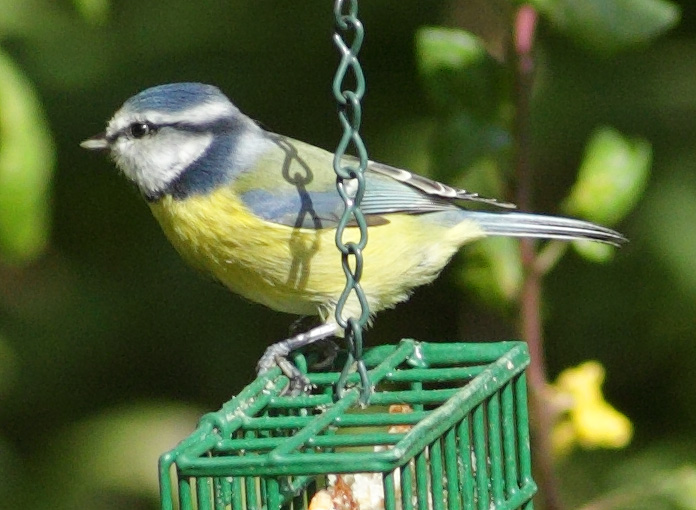 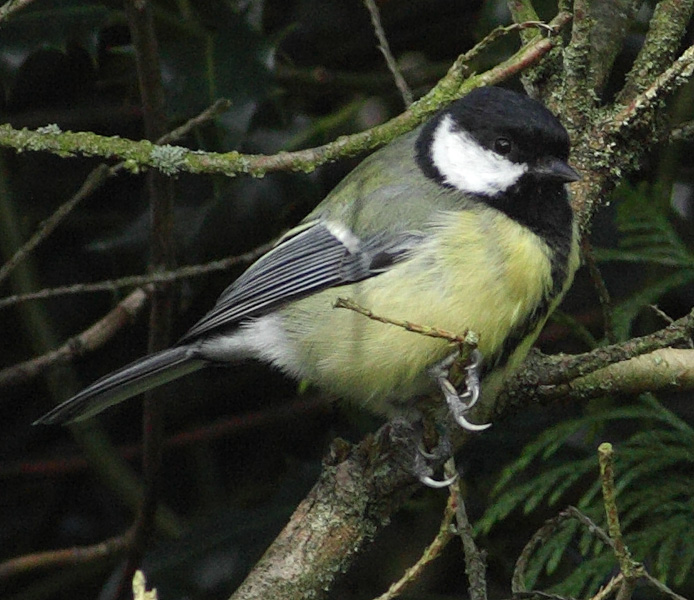 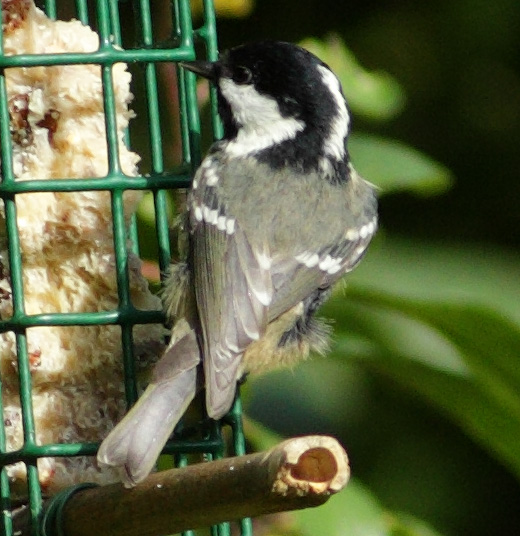 I saw two secretive little bird species - Dunnocks and Eurasian Wrens. Both of these species spend most of their time foraging in ground leaves. It was easy to see larger birds such as Woodpigeons, Rock Pigeons, Magpies, Carrion Crows, Jays, and Blackbirds in various stages of maturity. 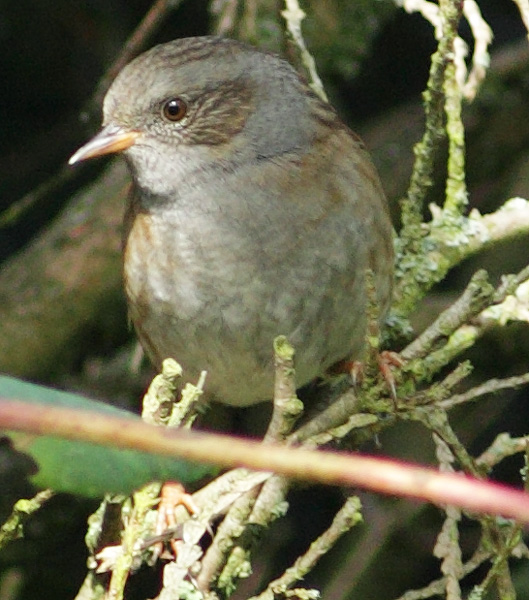 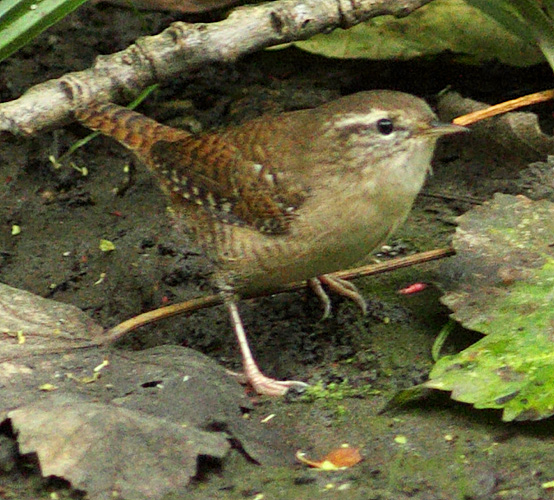 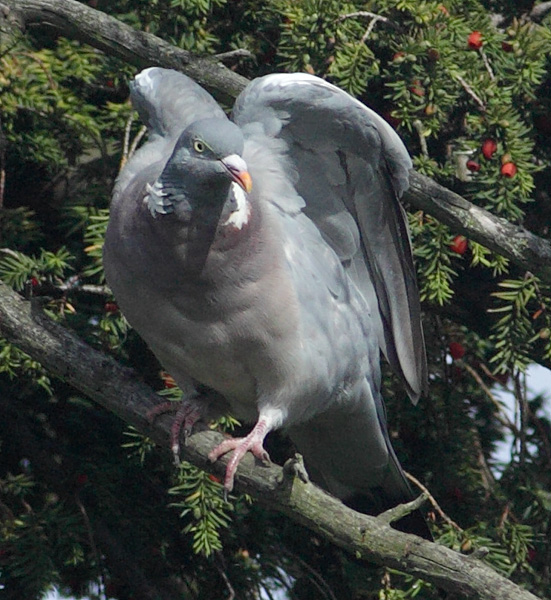 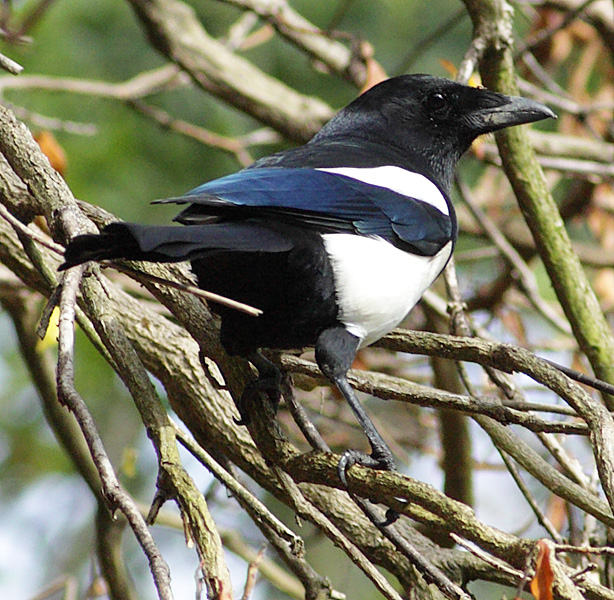 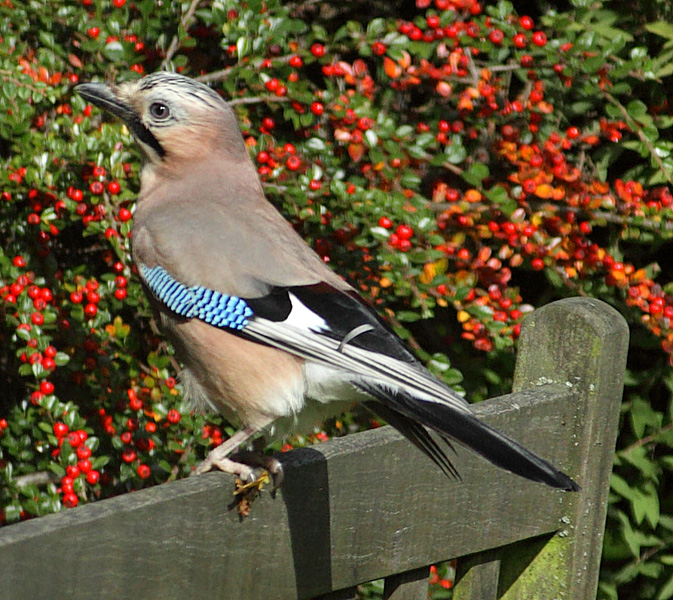 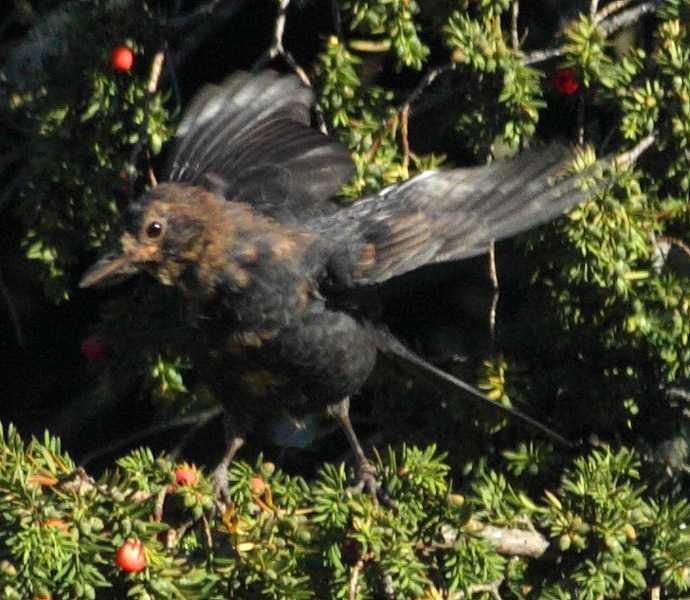 In the small streams and ponds, I saw a Grey Heron, juvenile and adult Moorhens, and Mallards. 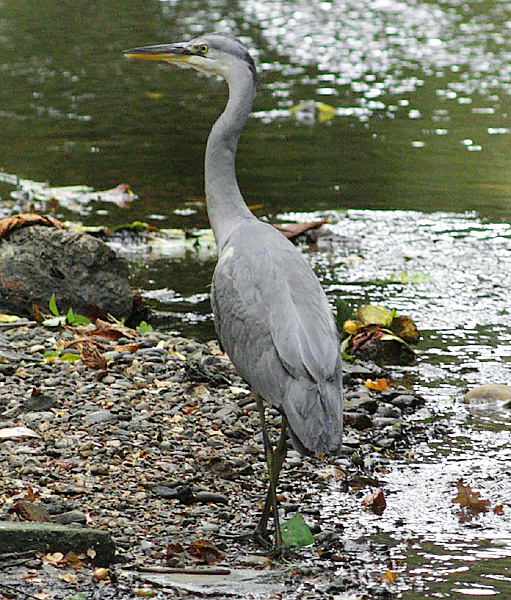 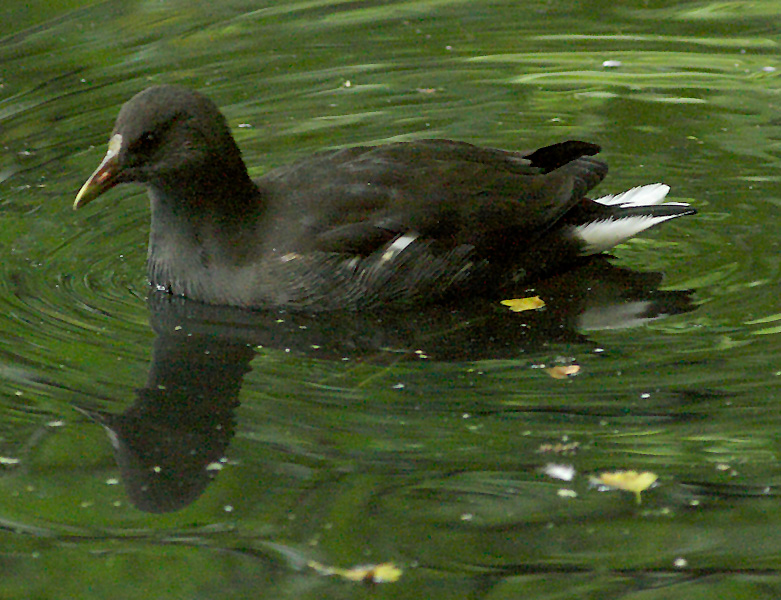 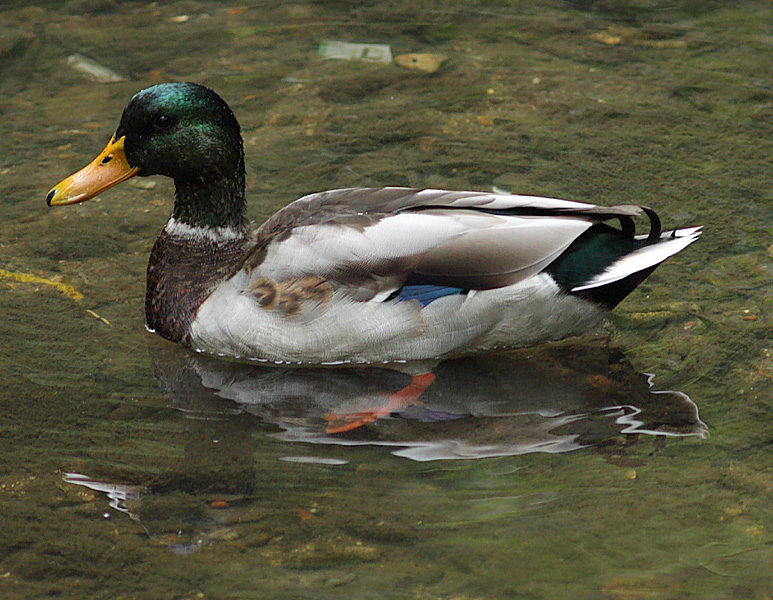 There were flocks of Starlings, a Herring Gull in a soccer field, and a male and female Chaffinch along one of the footpaths. I had a good view of a Great Spotted Woodpecker on the suet feeder, but it was gone by the time I got my camera. 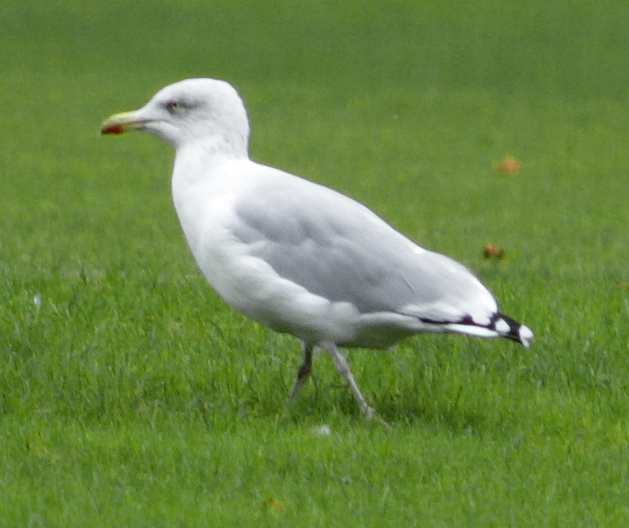 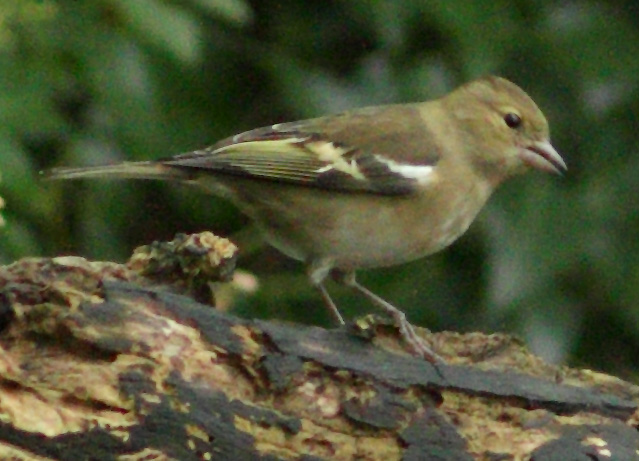 We visited some friends in the country just to the north of London, and I was hoping to see my third target bird - a Sparrow Hawk. They had a pair of these hawks nesting in the woods behind their house. I thought that I heard a hawk, but did not see one, and given the cold and light drizzle, I didn't spend too much time looking for it. However, as I approached the woods, a Red Kite flew away, and I got a few photos of it. 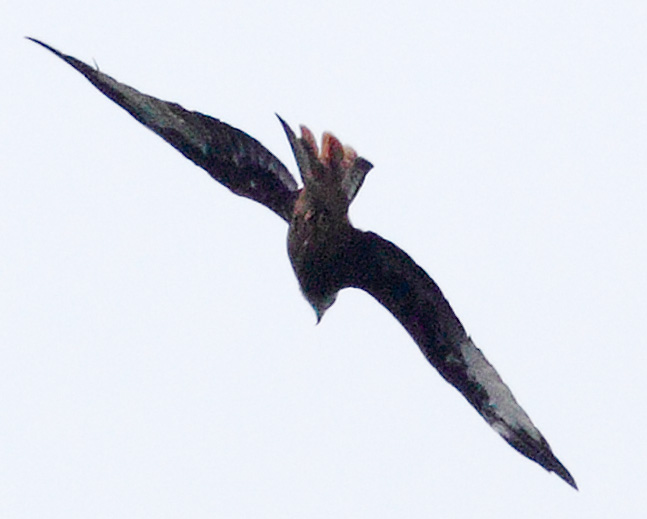 The most unusual photos I took were of a Mistle Thrush on top of a large tree behind my in-law's garden. Four of the shots taken in less than a 3 second interval show a falling object in the background. My best guess it that the UFO was a block of waste ice dumped from a airplane as it flew along a London Heathrow air corridor. Maybe it should have been called a "Missile Thrush." 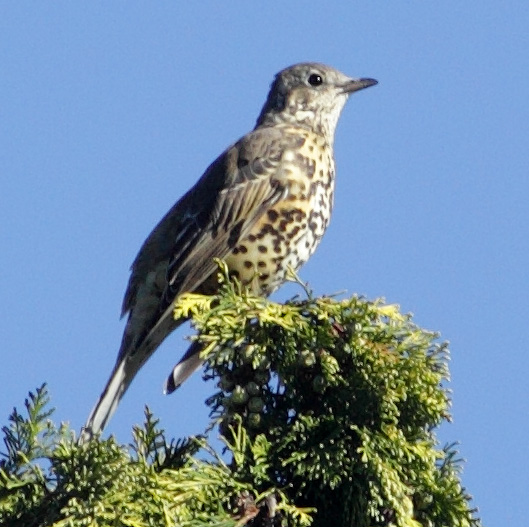 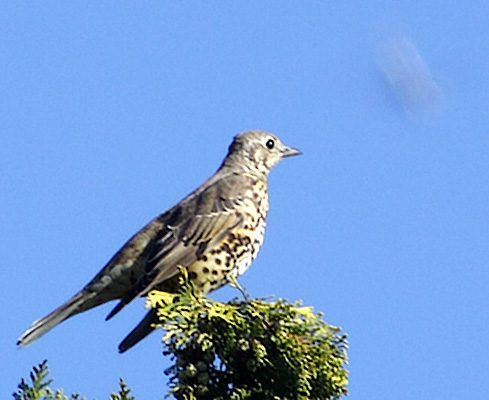 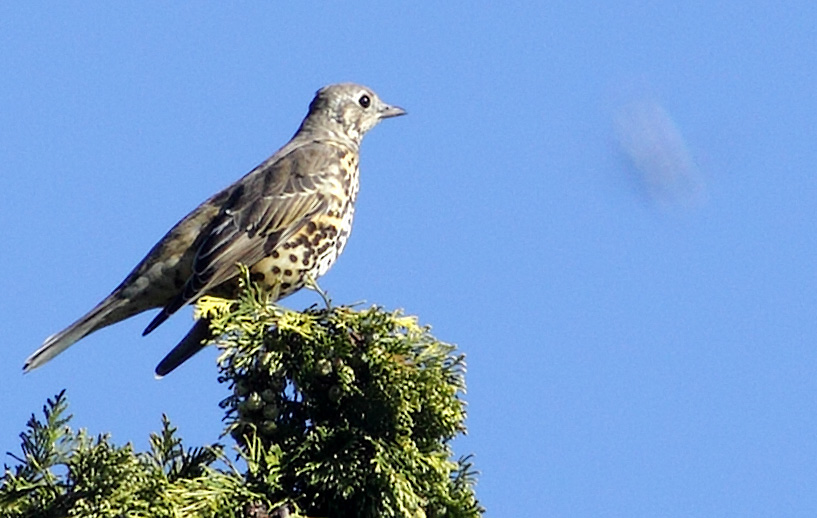 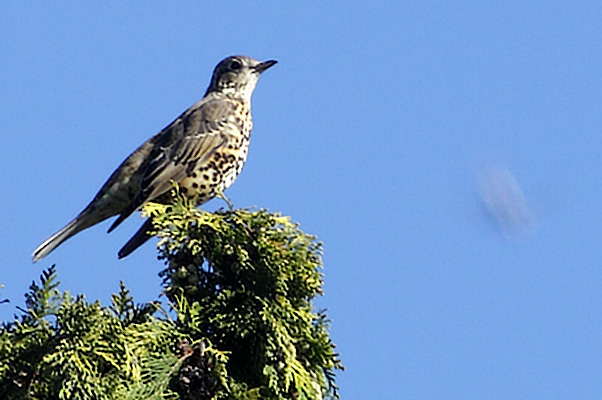 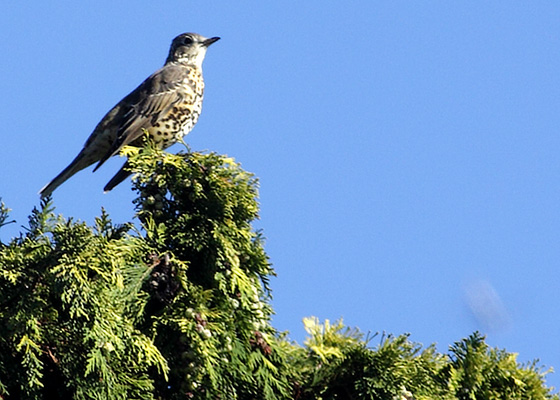 Oh yes - the other local wildlife. A squirrel often challenged some of the birds for the berries, and not only did we see the nightly fox visitor, but he brought along a friend. 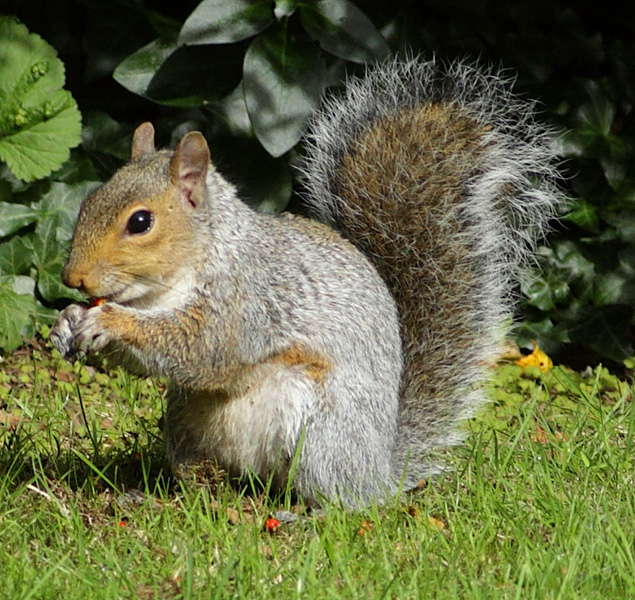 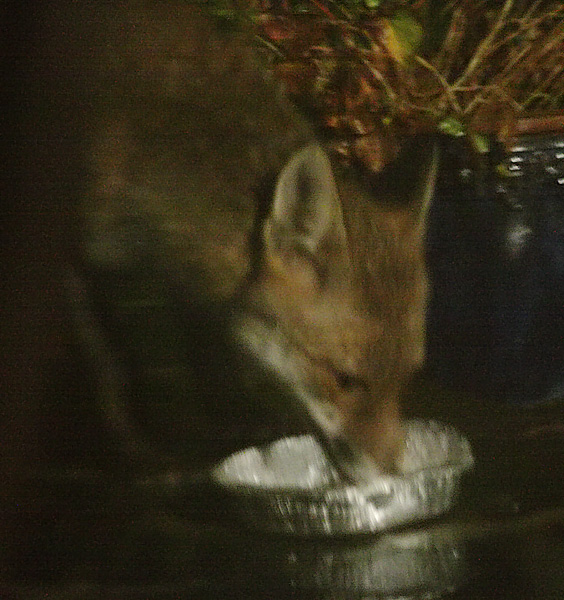 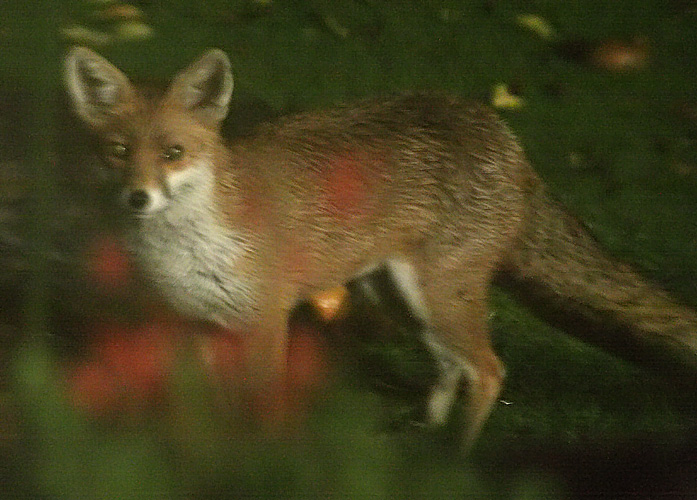 This was only the first half of our trip. We sailed back to the U.S. on the Queen Mary 2, and I was able to see a number of North Atlantic pelagic birds.