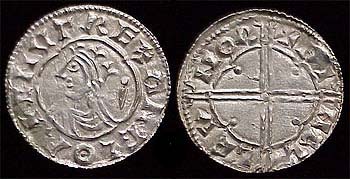 A hitherto unrecorded type for Cnut, as no reference for this period lists a Cnut quatrefoil penny with a dagger to the right of the portrait, which this well-struck coin clearly displays. Hence, it would seem to be a new type, although BMC does record an example from this moneyer (Ringulf) and mint (Norwich).

This coin clearly shows what appears to be a dagger to the right of the bust of King Cnut. But is the symbol really a dagger? Perhaps it represents a comet, the medieval omen for changing kingdoms.

Clearly, the Danish invasions of England saw much bloodshed, but by the time this coin was struck, Cnut had conquered his opponents, and England remained in a fairly peaceful state of existence during the rest of his reign.

Cnut's father, King Swein, had invaded England in 1013. Upon his death on February 3, 1014, Cnut was proclaimed king by the Danish fleet. During the period from 1014-1016, England was claimed by both the Saxon king, Aethelred II, and then his son, and by Cnut.

During 1015 and 1016, Cnut returned to do battle, and finally secured the title of king of all England in November, 1016, after both Aethelred II and his son had died. Two years later, in 1018, Cnut inherited the Danish kingdom when his brother, Harold, died.

During this period, three comets were recorded by medieval astronomers. From mid-February, one week after the death of Swein, through March, 1014, a comet with a long tail was recorded by oriental astronomers, and would have been visible in England if clear skies prevailed.

Without additional information, it is unclear whether this coin symbol represents a comet or a dagger, but the cross bar at the handle of a dagger is not part of the symbol, and a dagger shape had been described as a comet type (Xiphias) as early as the first century by Pliny the Elder (Caius Plinius Secundus), head of the western Roman fleet under Vespasian.

Given the peaceful state of England during 1017-1023, and the fact that the daggers represented on Viking coins of England a century earlier all had cross bars on the handle, it appears that a dagger shaped comet is the more likely representation. The figure below shows a comet type depicted in a 1668 manuscript. It is very similar to the symbol on the coin.